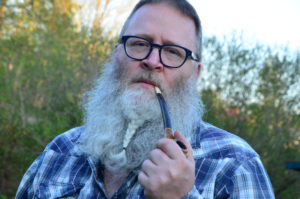 I was born 1963 in Ethiopia, where my parents were missionaries.

In 1976 we moved back to Sweden again, to a village called Mellansel – a small railroad community. This is where I met Karin, my first wife, and we got married in 1988.
Between 1984-1988 I studied at Umeå University. I have a degree in social work.
After University we moved to Uppsala where we lived for a few years.

I crafted my first knife at the age of 15 but during our time in Uppsala I became more serious about this craft.
In 1994 we moved back to the north of Sweden, to a very small village called Lövånger.
In November 2004 a new phase in my knife crafting started, I set up my own business called:

In 2008 my wife Karin died after a few years of illness.

The summer 2010 I moved to Gävle and now I live together with a new beautiful woman, Pia. I work in the public school system counselling young students.

In 2011 I had to give up my firm and go back to be just a hobby knifemaker.

carlMichael
More than 20 years of experience in custom knife making. All samples are one of a kind.
Personal creations and commissioned work after requirements and wishes.
© Michael Almqvist 2009 - handmadeknives@carlmichael.info